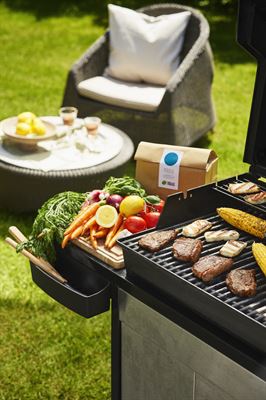 Swedes grill an average of 26 times a year, and it is carnivores that grill the most. A new survey by HelloFresh of the grocery store shows. Additionally, gender roles are clearly divided in the grill, with seven out of ten men answering that they are the ones who grill, compared to two in ten women.

When it comes to what we like to put on the grill, pork and sausage win, while beef and vegetables come in third. Then we love burgers, chicken and grilled cheese. Although meat is still a favorite on the grill, it is the vegetarian grill categories that have increased the most in recent years. A third of respondents have grilled cheese now more than five years, while one in four have grilled vegetables more than five years ago.

Men grill more
Grilling has long been presented as a man’s domain, and when asked who usually takes up the habit of outdoor grilling in the family, seven out of ten men answered “I,” while only two out of ten women answered the same question. Nearly six out of ten men answer that they are the ones who buy barbecue ingredients, while half of women give the same answer. When it comes to preparing dishes for barbecue, on the other hand, the roles are more equal, with 53% of men answering that they deal with this matter, while 51% of women answered the same.

More burger recipes for the European Championships, more Japanese for the Olympics
During the summer months, HelloFresh offers its customers the opportunity to change their lunch box delivery address to the summer venue. Weekly menus will also focus additionally on barbecue only and good barbecue recipes. In connection with the European Football Championships in June and July, more burgers are offered on the menu – an ideal alternative for anyone who intends to participate in the acid football tournament, and wants to eat something good. As if that weren’t enough, a number of Japanese-inspired recipes will also be available on the weekly menu just in time for the Olympics in Japan.

Top ten, this is what the Swedes put on the grill: