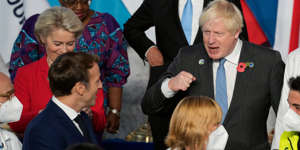 French officials said Sunday that British Prime Minister Boris Johnson and French President Emmanuel Macron had agreed to resolve a dispute over fishing rights between the two countries. According to France, both sides agreed to reduce the intensity, but that was rejected by Boris Johnson’s spokesman, the AFP reported.

– If the French government wants to put forward proposals to reduce the threats posed to us, we will welcome it. A spokesman said there was no change in our position after the G20 summit in Rome.

The fishing dispute has been going on for months since the UK left the EU, and which fishing boats can access which waters. On Thursday, tensions escalated as France stopped a British tug boat and arrested the captain for fishing in French waters without a license.

France has also threatened to halt cargo-carrying boats from Britain from Tuesday if French fishing boats are not licensed to fish in British waters.

Britain calls on France to back down from threats (AFP)

French official: “The goal is to work towards reduction” (Sky News)

Read more about Brexit on Omni