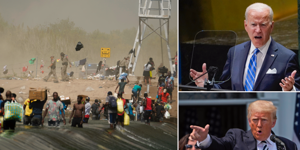 Joe Biden’s attempt to blame the refugee situation at the border with Donald Trump is a difficult strategy, BBC correspondent Anthony Zurcher wrote in an analysis after the White House press secretary said the previous administration was left behind “disjointed and inoperative”. the system”.

Blaming the ‘ex-man’ for a current problem is an old political maneuver – one that tends to be of limited sustainability. If the situation does not improve on the border, “the biggest problem” will be in Biden’s lap, Zürcher writes.

Politico’s Sabrina Rodriguez writes that “everyone,” not just Republicans, is now angry with Biden over the situation at the border.

When both progressive Democrats, who shy away from deportation to Haiti, and more moderate Democrats, who believe Biden has not done enough to deter refugees from reaching the border, are unhappy with the president, there is no longer a “safe haven” for him to run to. .

“Haiti’s refugees are another example of a policy that would have sparked outrage among US Democrats and human rights activists if followed by Trump.”

Sabrina Rodriguez: It’s not just Republicans – everyone is angry with Biden for immigration (www.politico.com)