Panasonic is a brand that we may associate primarily with high-end high-end monitors, but they sometimes flash with cheaper variants, like this one! The JX800E is actually a small milestone for Panasonic, as this is one of the first TVs with Android as an operating system.

In terms of design, the JX800E is a fairly simple story: a matte black plastic design and small legs towards the edges. The legs only have one position and therefore you need to stand on a relatively wide bench or shelf. (Photo: Panasonic)

The move to Android means Panasonic is well-updated on the app interface, with access to popular streaming services like Apple TV, Disney+, Paramount+, and more. In addition, it has wide support for many video formats, including the popular HDR format Dolby Vision. Hence, it is well equipped to entertain movies and series.

Ease of use is nice too. The remote is still similar to traditional Panasonic models, but the microphone and the Google button in the middle reveal that we’re dealing with Android TV. The remote control has Bluetooth instead of an infrared light, so it doesn’t have to be pointed directly at the TV for it to interact.

On the other hand, we think the buttons could have had a better sense of touch and not react as lightning fast as we would have liked. For example, Sony’s Android competitor obviously responds to commands much faster.

The new remote control is similar to the old Panasonic controls, but now has Bluetooth and a microphone. Also note the Google button! (Photo: Udon Hag)

The JX800E isn’t particularly well-equipped with connections: it has to rely on three HDMI inputs and none of them support the latest HDMI 2.1 functionality. There is also no support for the highest video frequencies (4K/120fps), which can be a bug if you plan to use the TV with modern video consoles like the PS5 and Xbox Series X.

Unlike the more advanced OLED and LED backlit displays in the test, the Panasonic JX800E is content with a standard edge-mounted LED. The board frequency is limited to 60Hz, while some more expensive models boast 120Hz. All this means that you can not expect sharp contrast and smooth movements. But we still think the JX800E performs well under these conditions. 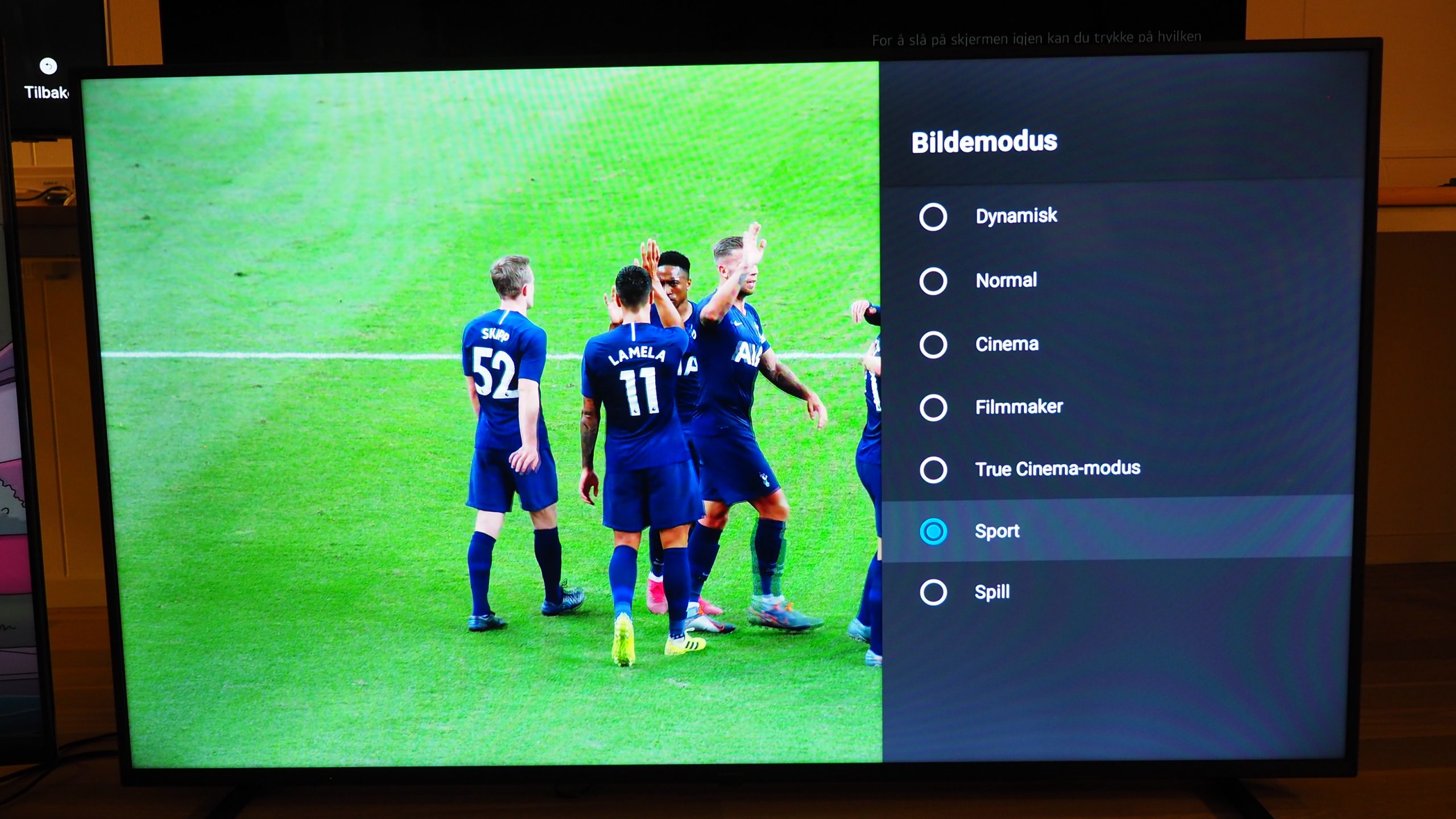 Panasonic’s screen paints an extremely sharp, color-true and natural picture, just like we’re used to. The JX800E also features a special sport mode that provides good brightness and strong, clear colors. We’re also fans of the sharpness: here you really see the tiniest details, right down to the finest blades of grass and Ronaldo’s beard.

This LCD screen excels at accurate light distribution, without annoying bumps, when we challenge it with demanding sports content. The only thing we notice is that the light gets a little weaker at the edges (the so-called vignetting).

On the other hand, the JX800 falls a bit short when it comes to absolute contrast and black. Standing next to competitors with impressive OLED and MiniLED backlights, contrast is modest and blacks are noticeably more gray. This isn’t a huge drawback for watching regular TV, sports and entertainment in broad daylight, but it will be clearly noticeable when it’s time for a relaxing Friday night and movie watching. 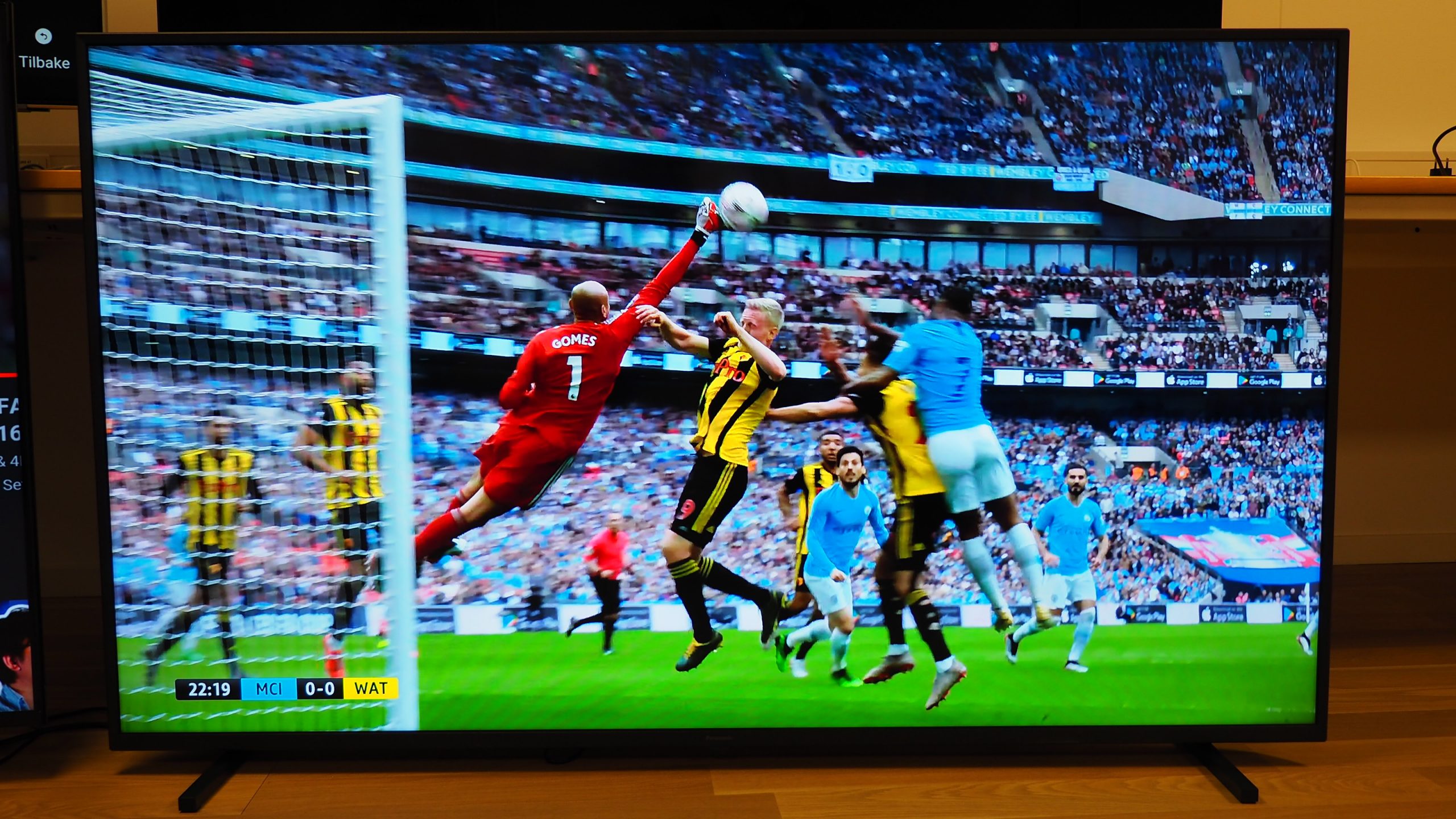 Audio-wise, the JX800E has standard stereo speakers mounted on the underside: the sound is really useful, with great clarity in the sounds. The Panasonic display can also play loud and clear without distorting or straining the sound, and the music content sounds nice. However, we really lack the bass: without a pure amplifier, there’s no real speed on the music and sound effects. Megaphone is the right medicine here.

The Panasonic monitor is the cheapest participant in the test this time around and may not show as high performance as two of the toughest opponents. It is especially noticeable that contrast and blackness are not at their peak. On the other hand, both the sharpness and color reproduction are very impressive: the JX800E stands out with a very sharp and accurate image that brings out detail in both sports and other entertainment. The JX800E also has the added advantage of a well-functioning sporty posture with smooth and even motions. Not the most powerful TV on launch, but a safe buy for those looking for a simple and easy to use Android TV.

More defections from the Pogo government