When AMD delivers processor news, the next big Ryzen 7 is the 5800X3D, which is the first to introduce 3D V-Cache technology to triple the amount of L3 cache. The next step is written in Zen 4 and will be the company’s first new architecture in two years, something AMD tells us more about when they hold the box during CES 2022.

An interesting detail is the unconventional design of the processor, in which the heat spreader cuts out sections. In six of the eight sections, space is provided for surface-mounted components that are usually found in other AMD processors under the heat spreader. One possibility is that the large mid-range keeps the same size as today’s processors, which is in keeping with AMD’s promise of cooler compatibility. In addition to the new architecture and the socket, the processors with the architecture of Zen 4 support PCI Express 5.0 and DDR5, two technologies that Intel introduced with the Core 12000 “Alder Lake” series. 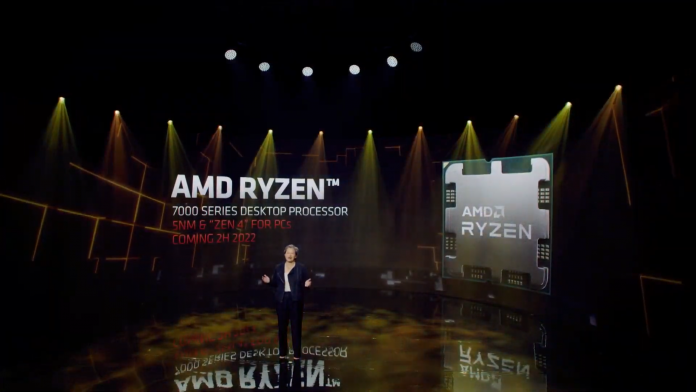 With the Zen 4 architecture, AMD is taking the step down to 5nm, which could lead to more cores on the consumer side. That will be the case for servers where Zen 4 goes up from 64 to 96 cores today and in the long run up to 128. Whether more than 16 cores like today’s flagship Ryzen 9 5950X will be suitable for the AM5 consumer platform, however, remains to be seen.

Finally, AMD CEO Lisa Su took the opportunity to show a short demo of an early version of the Ryzen 7000 in the game Halo Infinite. Although it didn’t share any performance numbers, it appears that all cores are running at 5.0GHz, which indicates that AMD can squeeze a bit more on final products that will be released during the second half of the year.