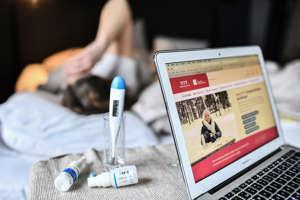 © Anders Wiklund / TT
It appears that fewer people get the flu. Photo gallery.


The number of new seasonal influenza cases has fallen sharply in Sweden. In total, nearly 900 cases were reported during the first week of the year, according to the Swedish Public Health Agency. This compares to nearly 2,500 cases before Christmas.

It also appears that the impact of influenza on health care is diminishing.

The number of people being treated for influenza in hospitals is decreasing, according to Maria Rutzen Ostlund, an infection control doctor in the Stockholm region.

– This is the picture you get when you talk to the top doctors in the hospital. It was stress before Christmas, but now it’s headed downhill with regards to the flu.

It’s very welcome because we have another virus that’s not on its way down, but on its way up.

Niklas Arnberg, professor of virology at Umea University, says the sharp drop is likely due to milder weather, but also increased caution regarding the sharp spread of COVID-19.

We know that heat plays a big role in the spread of influenza. When the flu appeared in mid-November, it was cold. Now we have much milder weather, he says.

According to the Swedish Public Health Agency, flu activity often slows during the Christmas and New Year holidays when many are free, and then increases again in January. But how the flu will develop this year is “difficult to predict,” the authority wrote.

How many constraints we have and how well we comply with them will play a role, says Niklas Arenberg and adds:

– And if the weather gets colder with cold snaps, it is likely that it contributes to the further spread of infection.

When it’s cold outside, the relative humidity inside drops, at the same time we spend more time indoors, which usually increases the spread of respiratory viruses.

When it is cold and dry, the mucous membranes also become thinner.

– The septum, that is, the layer of mucous membrane that normally protects our cells in the airways, becomes smaller and thinner, and thus protects worse.

Last flu season was extraordinarily mild, which made us more susceptible to infection when the flu appeared in November. We had a lot of restrictions during the last flu season and we were good at following them, notes Niklas Arenberg.

– This fall we didn’t have a lot of restrictions, we had a little Covid-19. It opened the door for other viruses to spread.