Behind the 14th hole in the MovieZine special interview calendar, we find… Actress Anna Friel!

During December, MovieZine releases a new interview every day, even on Christmas Eve. Our small ‘interview calendar’ will feature short talks with Swedish and international actors, directors and screenwriters. Behind slot #14 some quick questions from the Emmy-winning actress Anna Friel.

After she played one of the main roles in Brian Fullers’ TV series “Pushing Daisies” in 2007, most people will probably recognize Anna Friel from her role as Marcella in “Marcella”. She is currently starring in Sweden with a lead role in Viaplay’s psychological crime series “The Box” and took a short chat with MovieZine from the recordings of the upcoming Fox Venture project “Monarch”.

“Anthony Hopkins is one of the best actors ever”

Alexandre Karim and Anna Friel in “The Box”.

I spoke to Peter Stormare about the recordings of “The Box” recently and he told me that he himself has had a hard time keeping up with turns, because the series really makes sure to keep viewers vigilant about what’s real and what isn’t. You’re in almost every scene, how was it for you to take on this project?

The creation of the entire series was very surreal even in its own right. We came from a severe lockdown in the UK, where you had to be out in the air for an hour a day. Then sitting on a plane and staying in a hotel in Sweden that was closed to everyone and only open to us in production – going back and forth between the hotel and the circus [där serien spelades in] Every day… it’s like going from one box to another over and over again. All during a pandemic.

It was a strange experience, but at the same time it was very rewarding to be able to really live and focus only on work. I’ve never recorded anything happening more or less in the same room all the time either. It felt like we were recording the stage. It wasn’t always easy to keep up with what was real or not, because we didn’t score the episodes in order either. “Is my wife here or not?” But like I said, it was the same thing we wanted viewers to feel when they watched the series as well. Feeling a bit like “twin peaks” that you don’t really know what’s real or not.

Of all the movies you’ve watched since 2021, which one do you think is the best?

– I absolutely loved the movie “The Father” with Anthony Hopkins. I’ve never seen a movie created from this perspective before, where you can really feel what it’s like to experience the world in this way. I really think Anthony Hopkins is one of the best actors that ever existed, and his role here was as an acting mastery. The movie touched me and lived in me long after that. Since then, I’ve seen and liked both Annette and Spencer, too.

“I’m a huge fan of Josephine Burnebusch, so I’m a real fan.” 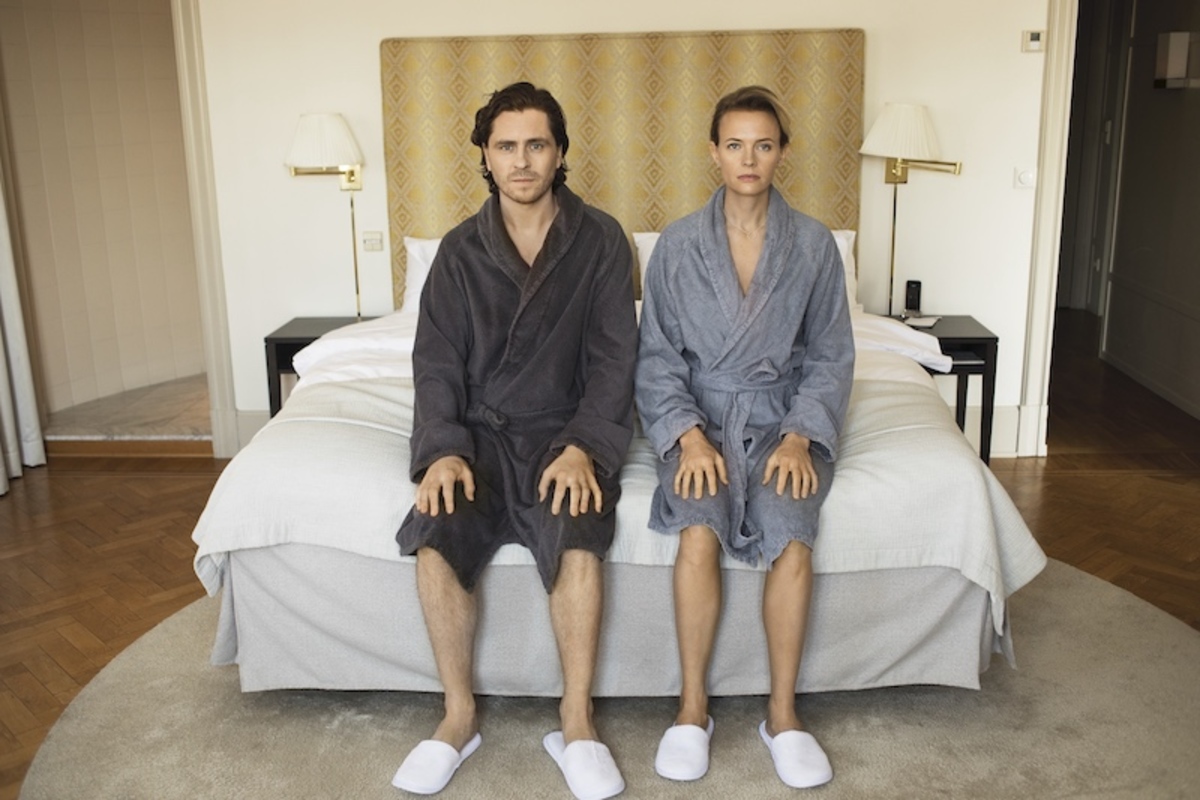 Sverrir Gudnason and Josephine Bornebusch in “Love Me.”

Of all the TV series you’ve watched since 2021, which one do you think is the best?

– “Succession”. But then I’ve only had time to watch Season 1 so far, and although everyone says it’s still good, there’s nothing else this year that can beat it in my opinion. The script is really very well written – and I really like what the actors have been able to do with it. Anyway, I feel like I can consider myself happy with two seasons ahead of me!

– Then I’m a big fan of Josephine Burnebusch, so I’m a real fan. I watched her movie ‘Orca’ which was shot during the pandemic and ‘Love me’ series. I really think she’s a very amazing talent and I’m very impressed with her.

I agree with! I spoke to her regarding the first season release and saw her look a bit like the Swedish version of Phoebe Waller-Bridge…

– Of course, I totally agree! I hope to get a chance to work with her sometime in the future. I’d love to work with Alexander Kerim and Peter Stormare again too, both of whom were incredibly nice to work with while filming ‘The Box’.

What title (movie or TV series) are you looking forward to seeing in 2022?

– ‘Monarch’ of course, haha! I really can’t wait for people to see and hear this series next year.

All episodes of “The Box” are now available on Viaplay. Marcella can be watched on Netflix. “Monarch” comes out January 30 in the US, but it remains to be seen when the series will find its way here (maybe to Disney+ because it owns Fox).

Tomorrow we open the next cover of the MovieZine interview calendar, stay tuned!

Unlike Sweden, Denmark faces a diplomatic boycott of the Beijing Winter Olympics