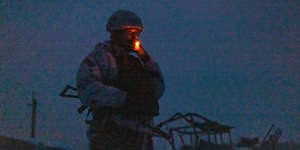 The Russian landing ship that has been sent to the Baltic Sea in recent days may be a tactic to pressure NATO into negotiations. This is what Johan Norberg, a security policy analyst at the Swedish Defense Research Agency (FOI), told Ecot.

Much of what Russia is doing now is designed so that we don’t know what the intentions are, and we have to remain in a state of anxiety and ambiguity, says Norberg, who thinks Russia knows that the gunfight pays off.

In a short time, Russia has gone from one to six landing ships operational in the Baltic Sea, DN writes. One of the ships belongs to the new Ivan Gren type, and is the largest fortified ship built by post-Soviet Russia, says analyst Jonas Kjellén at FOI for DN. The Swedish Armed Forces assure the newspaper that it was precisely this type of ship that made them choose to work on Gotland.

Analysts: “Unfortunately, this is something we have to get used to, that coexistence with Russia looks like this” (Swedish Radio)

In December, a Russian Ropucha-class landing ship was active in the Baltic Sea (January 14) (Dagens Nyheter)

Read more about safety around the Baltic Sea at Omni