Russian missile attacks intensified during the past 24 hours on a number of major Ukrainian cities. In Kharkiv, the country’s second largest city, Mayor Oleg Senegubov said at least 21 people were killed and 112 wounded in Russian attacks in the past 24 hours.

Residential buildings and government buildings were destroyed in the attacks, according to the mayor. In the morning, Russian parachutes were said to have landed in Kharkiv, according to AFP.

At 9 am, new information was received about a missile attack on a police house in Kharkiv, and the photos show great damage. Damage status is currently unknown.

Also from the port city of Mariupol Come information about fierce battles. According to the mayor, the city has been subjected to intense bombardment with grenades since Tuesday night, and the wounded cannot be evacuated, according to Reuters.

“We are fighting and we will not stop defending the motherland,” Mayor Vadim Boychenko said on Ukrainian television on Wednesday morning. 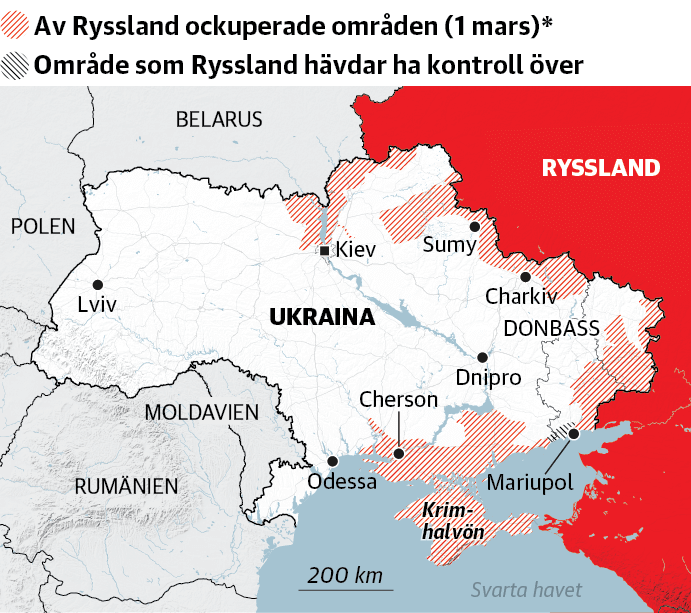 In Kherson in southern Ukraine, Russian troops are in the center of the city, reports CNN. Mayor Igor Kulekhaev stated that the train station in Kherson is under Russian control and at 08.30 on Wednesday morning, the city is completely besieged by the Russian army, according to the region’s governor. Russian media reported that Kherson is now under Russian control, information that Ukraine has not confirmed.

In a speech he gave on Wednesday morning, Ukrainian President Volodymyr Zelensky said 6,000 Russian soldiers have been killed in the fighting since Thursday, when the invasion began, and the information has not been confirmed elsewhere.

The president also addressed yesterday’s attack on the Kyiv TV tower. The missile attack is also said to have hit the nearby Holocaust memorial site, Babin Yar.

Moscow is trying to erase our history, and the attack is proof that many Russians don’t know anything about Kyiv. To the millions of Jews in the world, do you not see what is happening? Nazism was born in silence. So please speak up about the killings of civilians, the killing of Ukrainians, says Zelensky.

Attack on the TV tower in Kyiv 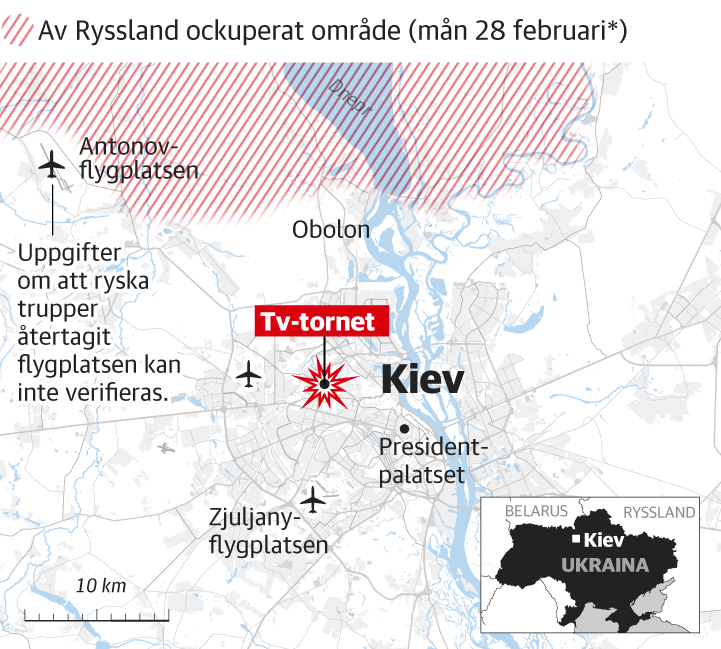 In the speech, the Ukrainian leader addresses the outside world – for more support and more sanctions against Russia.

Now is not the time to be impartial, he says.

In recent days, the Russian military convoy of more than 60 km has been in the eyes of the outside world. According to information from British intelligence, among others, the convoy is about 30 kilometers outside the capital, Kyiv.

According to Elmari Kehko, associate professor and senior lecturer in military sciences in the Department of Military Science and Military History, it is still unknown what the next step for the convoy will be.

– They may have to regroup, it is possible that they will begin to encircle the capital in a few days, he says.