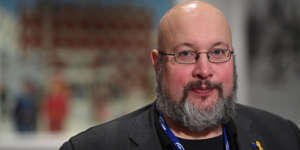 Russia and China are investing heavily in trying to spread their propaganda through Western media, and Swedish journalists need to improve their knowledge so that they are not taken advantage of by authoritarian countries. Gunnar Hokmark and Patrik Oksanen from the think tank Frivärld wrote this in a discussion post on Expressen.

Hökmark and Oksanen criticize a text from TT, which was later corrected, in which the news agency described Russia’s illegal annexation of Crimea as something organized from below, rather than a military occupation. They also highlight how global news agencies AP and Reuters are distributing TV content from China’s state-owned television channel CCTV to other media outlets around the world. Omni has also been criticized for a headline saying Russia could invade Ukraine, which the book believes indicates that Russia has not actually invaded Ukraine.

Patrik Oksanen is a journalist, author, and former lead writer, as well as a Senior Fellow at the Frivärld Research Center and responsible for the Center for Impact and Disinformation Analysis (CIDA).

Gunnar Hochmark (M) is a former Member of the European Parliament, and Head of the Frivärld Research Centre.

Read more about the conflict in Ukraine on Omni