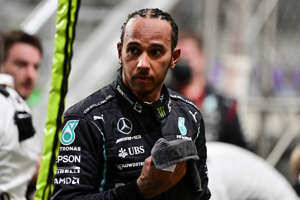 © Andrej Isakovic / AP
Mercedes driver Lewis Hamilton does not want to do anything with sponsor Kingspan, he said ahead of this week’s Formula One race. The cooperation ends now. Photo gallery.


Mercedes’ Formula 1 team has ended its sponsorship agreement with Kingspan after a week of heavy criticism.

The company is accused of contributing to the Grenfell Tower fire.

“We have reached a mutual agreement that it is not appropriate to continue at this time,” Kingspan wrote in a statement.

The Formula 1 team behind Lewis Hamilton announced last week that the driver’s car’s nose will be decorated with the company’s logo. A decision that was not well received by the seven-time world champion himself or the community in Greenville.

“It has nothing to do with me,” Hamilton said at a news conference this weekend.

In fact, the company has been accused of contributing through its flammable materials to the massive fire at Grenfell Tower in west London in 2017, in which 72 people lost their lives.

Lack of fire safety with flammable facade materials were cited as the reasons why the fire quickly became uncontrollable.

Survivors and relatives of those who died in the fire responded forcefully to the sponsorship agreement and demanded that Mercedes withdraw, which the Formula 1 team is now doing. The tragedy, which in some way has become a symbol of societal divisions and austerity policies, has sparked significant controversy in the UK since 2017.

See also  "I feel like I'm making an immediate difference"