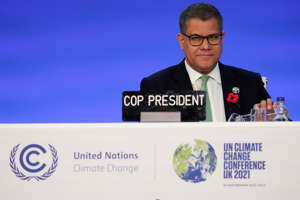 
The world watches and trusts that we make ambitious and courageous decisions. That’s what the chair of the Climate Summit, Alok Sharma, said in Glasgow – as countries working overtime are trying to agree now.

Climate negotiators from about 200 countries are working overtime to try to agree on the final document that will be the political signal from COP26 in Glasgow. Negotiations continue until the last meeting, and meeting chair Alok Sharma is now listening to the final objections in plenary – but he hopes the meeting will move quickly so that the meeting moves to its conclusion in the late afternoon.

“This is a moment of truth for our planet, for our children and grandchildren,” he said.

The world wants us to be brave and ambitious in our decisions.

The UN conference was supposed to end on Friday, but he’s working overtime. All sides must agree, and that means a delicate balance between economies dependent on fossils, the major culprits of emissions and small island states fighting for their futures when sea levels rise.

– Probably all countries wanted more of their different points of view. But if this is the British assessment of what a reasonable compromise is, then I hope all countries can see that this is a well-balanced package, says Swedish chief negotiator Matthias Fromri on the proposal on the table.

The last major issues were financial support for poor countries, whether the phase-out of coal and fossil fuel subsidies should be mentioned in the final document that is a political cue from the meeting, but also about how quickly countries can come back with new goals. How should greenhouse gas emissions decrease?

A controversial piece that some energy from coal and some fossil subsidies should be phased out has survived negotiations – but with new reservations that it should be done in a “fair” way. Fossil-dependent nations want to scrap language that was watered down during the meeting. But many countries still consider it an important step forward because the Paris Agreement makes no mention of the role of fossil fuels in global warming.

We also urge countries to speed up and come up with new, updated and robust plans to cut emissions early next year – when COP 27 takes place in Egypt. But it also says that the various circumstances that exist to do so must be taken into account.

During the weeks of the meeting in Glasgow, the dispute between the two parties to the Paris Agreement was clearly exposed. The poor countries – the hardest hit by climate change and who have contributed the least to it – need more help. The fact that the richest countries failed to provide $100 billion annually in climate finance to developing countries identified more than ten years ago has been a shadow of COP26 from the start.

Billions will help poor countries adapt to climate change and efforts to reduce emissions. The new draft calls for rich countries to double the money that will go to the amendment by 2025, compared to 2019.

But the poorer countries also want to create a special fund for money that will be earmarked to deal with the devastating climate impacts that are already occurring. However, it has been slowed down by many large donor countries.

An important task of the Glasgow meeting is to fill the last remaining gaps in the so-called rule book of the Paris Agreement, which previous conferences have failed to do. Here, Article 6, which sets emissions trading rules, is notoriously complex to agree to, but transparency rules and common timeframes for reporting on climate action have yet to be resolved.

The meeting’s overall ambition is to maintain the Paris Agreement’s goal of limiting global warming to 1.5°C – to mitigate the most devastating effects of climate change. To achieve this, carbon dioxide emissions must be reduced by 45 percent by 2030, compared to 2010, and net zero by 2050.

However, the countries are nowhere near fulfilling. Their current climate commitments suggest global emissions will increase by about 14 percent by 2030, compared to 2010 levels.