Copernicus Climate Change Service (C3S)implemented by the European Center for Medium-Range Weather Forecast on behalf of the European Commission, routinely publishes monthly climate bulletins that report on changes observed in the global report. surface air temperatureAnd the sea ​​ice And the Hydrological variables. All reported results are based on computer-generated analyzes using billions of measurements from satellites, ships, aircraft and weather stations around the world. 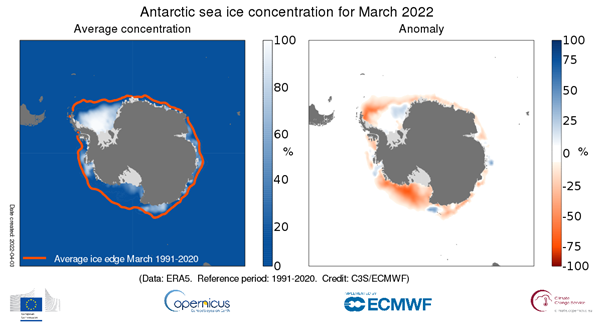 The maps and data values ​​for sea ice were taken from a set of information from ERA5, as well as from EUMETSAT OSI SAF Sea Ice Index v2.1 and Sea Ice Concentration CDR / ICDR v2 and quickly accessible data that is provided on request by OSI SAF.

C3S followed the recommendation of the World Meteorological Organization (WMO) to use the past 30 years to calculate climate averages and changed to the 1991-2020 reference period for C3S Climate Bulletins covering January 2021 and beyond. Figures and graphics for both the new and previous periods (1981-2010) are provided for transparency.

Copernicus is part of the European Union’s Space Programme, funded by the European Union, the flagship Earth observation programme. The operation operates through six thematic services: Atmosphere, Marine, Land, Climate Change, Security and Emergencies. It provides freely available operational data and services that provide users with reliable and up-to-date information about our planet and its environment. The program is coordinated and managed by the European Commission and implemented in partnership with Member States, the European Space Agency (ESA), the European Organization for the Exploitation of Meteorological Satellites (EUMTSAT), the European Center for Medium Distance Forecasting (ECMWF), European Union agencies, Mercator Océan and more.

See also  Regulating the new PDA does not arrive all the way | Realtid.se